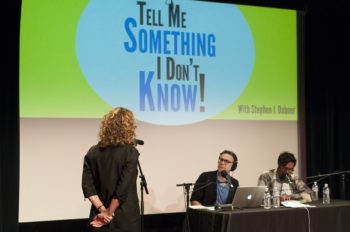 Host Stephen J. Dubner questions a presenter during Season 4 of Tell Me Something I Don't Know (Photo: Lucy Sutton)

Season 4 of Tell Me Something I Don’t Know is almost here! Get ready for 10 brand new episodes starting September 17. We’ve packed every episode with things you probably didn’t know, and we’ve got some great co-hosts, including — but not limited to — Alex Guarnaschelli, Alex Wagner, John McWhorter, Angela Duckworth, Hari Kondabolu, Jemele Hill, and Alexandra Petri.

If you don’t already subscribe to TMSIDK, you should, right now. Especially because it’s free. If you can’t wait until September 17, you can get the first episode of the new season right now, ad-free, by signing up for Stitcher Premium. Also, follow TMSIDK on Twitter, Facebook, and Instagram.

And if you want to be part of Tell Me Something I Don’t Know, sign up to be a contestant or come to one of our live tapings in New York City this fall. We’ll be at Joe’s Pub at the Public Theater, in downtown Manhattan, on October 5, 6, and 7, so join us! Because you never know what you’ll learn.